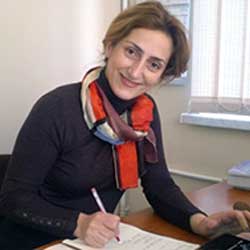 Suzanna Juharyan is a 1997 graduate of Yerevan State University, Faculty of Sociology and a 2000 graduate of Moscow School of Social and Economic Science, Faculty of Social Work and Social Administration where she received her Master of Science in Social Work.  She has been a member of the faculty at YSU as a lecturer since her graduation.  The scientific fields of her interests are the historical aspects of social work development in Armenia, implementing case management methodology in social services and organizing the field practice for the students of the Social work department in YSU. In addition to her role at YSU, Ms. Juharyan has worked in Armenia and internationally as a researcher, counselor, trainer and expert in projects focusing on the needs of youth and women, including “Teenagers’ Hotline”, “Prevention on HIV/AIDS”, “Social Workers’ Training Program”, “Violence Against Women,” etc.   She participates in projects directed toward the development of social protection systems, especially designing the integrated social services system in Armenia. Ms. Juharyan, who in July 2014 relocated her family to Austria for the next few years, served as program director from February 2014 until July 2014. She was instrumental in developing the infrastructure for the current model under which the program is now operating and hiring the professional staff now serving our program. She remains part of the team as a consultant to the program staff and the U.S. Board. Ms. Juharyan is fluent in Armenian, Russian and English.  She is married and mother of two children.