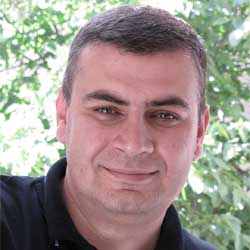 Mihran Mirijanyan, a native of Yerevan, Armenia, is a 1999 graduate of Yerevan State University, Faculty of Russian Philology.  After serving two years in the National Army of Armenia, he attended two years at the Public Administration Academy – Yerevan, Armenia, Faculty of Public Administration where he received a law degree. He later worked as a specialist with the Ministry of Energy of the Republic of Armenia, in the Department of Development and External Relations, External Relations and Coordination of Investment Projects Division, and External Relations, Protocol Division.  In 2007-2008, Mr. Mirijanyan served as the assistant to the Minister of Energy, and traveled to Brussels to the Energy Charter of the EU as a representative of the Republic of Armenia. In 2009-2010, he worked in the Ministry of Justice. Mihran has been with Mer Hooys since the spring of 2011.  He brings to Mer Hooys extensive experience working with the Armenian government and familiarity with a variety of organizations based in Armenia that provide services to programs such as Mer Hooys.  He has been instrumental in establishing beneficial relationships between Mer Hooys and the government, local community, the Church, and local non-profit organizations.  He handled all tasks required to prepare the facility to receive our first group of residents in the fall 2012. Currently, in addition to collaborating regularly with the U.S. Board and the on-site professional team, he oversees all government and public relations, manages the maintenance and repair of the facility and supervises facility staff.  In addition, he serves as an ambassador and representative of the U.S. Board with the Armenian government and Mother See.  Beginning in fall 2014, he will be pursuing a PhD in public administration from Public Administration Academy of Armenia. Mihran is married with a son and a daughter, and considers each of our Mer Hooys girls part of his own family.  He is a dedicated partner with the U.S. Board, and has committed himself to improve the lives of our girls.